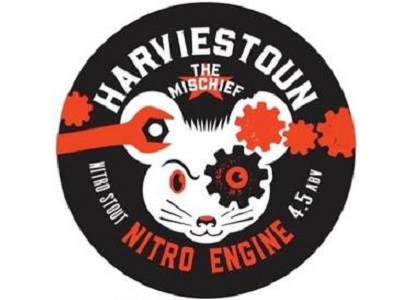 Harviestoun Brewery have added to their already impressive list of honours a Bronze medal at the International Brewing Awards for their Mischief Nitro Engine in the Dark Beer 3.8% – 4.7% ABV category.  Using their Moravek CW400 for nitrogenation this limited-edition nitro stout was described by one journalist as:

“a good place to start if darker beers scare you – especially if you think they’re too heavy. It [is] creamy with a light body and [has] distinct coffee and chocolate flavours combined with a smidge of vanilla and caramel. There [is] also a wee hit of smokiness in the finish. A good nitro for beginners.”

Founded in 1983 by Ken Brooker, the Scottish brewery has grown steadily to become renowned for their award winning beers.  Kicking things off was their Schiehallion Lager (yes, they like unpronounceable names!) winning the Champion Beer of Britain Gold in the ‘speciality beer class’ of CAMRA’s annual awards in 1996, 1997 and 1999.

Head brewer, Stuart Cail, joined Harviestoun in 1995 and cites his proudest achievements as winning Supreme Champion Beer of Britain (2003) and creating Ola Dubh (2007).  Did we mention they like unpronounceable names?!

Over the years the brewery has found new and innovative ways to create truly unique beers from their whisky cask aged Old Engine Oil to Bitter and Twisted, aged in Gin and Pinot Noir barrels.

Now, they have successfully ventured into the area once associated solely with a particular Irish brewery. More and more craft breweries are starting to use the nitrogenized method and bars are embracing smaller nitro producers as production grows.

Nitro refers to the type of gas used in the carbonation process.  It creates a creamier beer and typically contains about 70% nitrogen and 30% carbon dioxide.

Stuart Cail explains why Harviestoun decided to try their hand at a Nitro beer:

“Our Old Engine Oil works in many formats but we thought it would be good at a lower ABV in cask. We were pleased with this beer and so decided to do a keg version at lower ABV too. We decided to use mixed gas to produce a smother finish to the beer and not let the roast barley become harsh. This has worked well and we are very pleased to be able to add this beer to the range.”

It’s always nice to see hear when our machines help win awards and we hope that for Harviestoun there are many more in their bright and innovative future.